It’s founded by Fredrik, a Swede based in Prague since 2008, training to be ordained as a lay priest in Rinzai Zen school of Buddhism under the guidance of Michael Pockley. You can check lineage here if you’re into these things.

We're particularly interested in early Chan Buddhism and the spirit of Shaolin. Our name Xingru comes from the teachings of Bodhidharma as captured by Tanlin in the work called Two Entrances and Four Practices.

Bodhidharma is almost a mythical figure, he did exist but little is known about him so the majority of texts about him are about the legend of Bodhidharma rather than the person Bodhidharma. More about this in a future blog post.

Entrance through Principle means to use the teachings to awaken the essence and understand that all beings have the same pure nature.

Entrance through Practice means to live by four practices that encompasses all other practices.

We focus on Entrance by Practice - xingru - bringing the way of Zen into our daily life.  Read more about Two Entrances and Four Practices here in the second half of this article about The Four Noble Truths. Circling back to the connection to Shaolin.

Bodhidharma didn't create the martial art we now know as Shaolin gong-fu but introduced physical exercise and self-defence to fend off bandits and robbers roaming the valley of the Shaolin temple.

When he became the abbot of the Shaolin monastery around year 500 CE it was a temple for writing monks busy translating the sanskrit Dharma to Chinese.

Bodhidharma found the monks to be lazy and so out of shape that they'd fall asleep during meditation. To keep the monks awake, to be able to meditate longer, and thus speed up awakening, he introduced physical exercise inspired by a mix of traditional yoga and the martial arts he had developed through is long and extensive travels. Much later was his training codified into the first Shaolin martial art system as we know it today.

According to the legend he did leave two specific manuals behind though. One is Yijin Jing, in English called Muscle Tendon Strengthening QiGong, and is what the Shaolin call an internal martial art. It's a strenuous series of movements coordinated with breathing to strengthen muscles, tendons and ligaments, all performed with a focused mind. The other manual, Xi Sui Jing, was lost but has been restored as Bone Marrow Cleansing QiGong.

That Bodhidharma was the creator of Yijin Jing and Xi Sui Jing has been argued intensely by the scholars and I don't think we'll ever get to a definite answer.  Personally, I like the legend of Bodhidharma, but I hold it lightly. 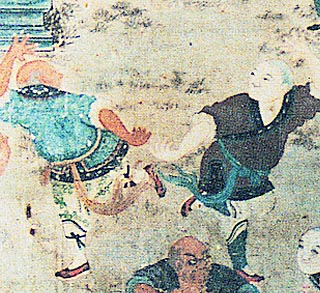 Wall painting at the Shaolin monastery

Is Buddhism a religion?

No. We don’t do religion.

We agree with Vietnamese Zen Master Thich Nhat Hanh when he said "Buddhism is not a religion, it’s a practice, similarly to yoga, which you can do irrespective of religious beliefs."

This statement is a bit controversial, both to some Buddhist and to others, so let’s define religion and take a closer look at how Buddhism relates to the definition of religion.

Based on this it's fair to conclude that the definition of religion includes a supernatural element with the power to influence humans. We find this in the Abrahamic religions like Christianity and Islam, and polytheistic belief systems such as Hinduism.

The key question then is whether Buddhists believe in "supernatural elements with the power to influence humans". The answer is not straight-forward because there are many different branches of Buddhism but weighing it all in...   the answer is No.

Buddhists do not believe in supernatural elements with the power to influence humans and thus can't be defined as a religion. However, there's one branch of Buddhism, Pure Land, which is theistic and thus qualifies as a religion and there are religion-like features in Tibetan Buddhism.

So the next step is to look in the Pali canon to learn what Buddha said.

I've written a longer article explaining Pure Land, Tibetan Buddhism, referencing the Kalama sutta and the Dhammapada, and suggesting what to call Buddhism if not a religion.

Find the longer the article here.